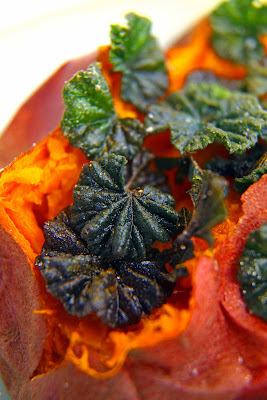 When a major cold snap hit last week, I thought my time for foraging greens was up. But then, when I was out riding, I would see little patches of mallow (Malva neglecta) along protected fence lines. Unfortunately, there were yards on the other side of those fences, and I won't eat any food that comes near kept grass. There is just too much potential for contamination with chemicals. This is something you constantly have to be aware of in an urban setting. It seems to me that the risk of illness from a misidentification is minimal if you are a thoughtful urban forager, but the risk of eating pesticides, herbicides, or other chemicals is very real. I stay away from lawn, parks, roads, and anything that grows directly next to a trail.

So, after quite a few miles on my bike, I was finally able to find a patch of mallow growing in an area protected from the elements, but safe from chemical warfare (not an easy combo deep into November in the Rocky Mountain region). Even though the leaves are smaller than in the summer, I was still able to collect enough for a few recipes.

If you would like to forage mallow, look for it's telltale fan-shaped leaves. The plant tends to creep along the ground in disturbed soil (near humans). The leaves, flowers, and fruit are all edible. Some think mallow fruit tastes of cheese, thus it's other common name - cheese weed. Use mallow leaves as you would any greens, sauteed with something porky, in salads, with eggs, or in soups.

In honor of Thanksgiving, I decided to make candied sweet potatoes with mallow. I know, another food joke, hooray, the last one went over so well. Don't hurt me, but I'm not a fan of sweet potato casserole with marshmallows on top. If you aren't either, perhaps you'd prefer this version, where the sweet potato gets naturally candied with a long roast, and eventually benefits from the contrast of crispy mallow.

Roast whole sweet potatoes in the oven for a least an hour, until they get quite soft. In the meantime, dust dry mallow leaves with a little rice flour, and shallow fry them in lard (be very very careful, they'll spatter!) for just a few seconds, or until crispy and lightly browned. When the roasted sweet potatoes are cooked, slit them down the side, slide a few pats of butter in them, sprinkle with black walnuts (or pecans), and top with the frizzled mallow and a few cracks of salt and pepper.