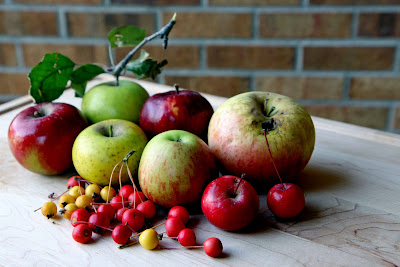 Foraged apples! I know, it's late in the year, and I live in a place that has real winters. But last week, I was riding my bike down a trail along an irrigation ditch which is somewhat protected from the elements. The leaves had all fallen, and it was a cloudy day (no low-angle sun in the eyes) so I could clearly see all of the plants along the ditch. Being so late in the year, I was shocked to see apples (Malus spp.) everywhere, apple trees that I hadn't previously known about (and I ride that trail several times a week!). The majority of their fruit had fallen, but the trees each still had quite a few apples clinging to their branches.

Seeing so many apples inspired the forager in me. So, I tore back to the house and retrieved my fruit picking basket, which I have attached to a light bulb changing handle that telescopes out to 12', sa-weet! I rode back down the trail, and plucked a few apples from every tree that I could find. In all, I collected ten distinctly different varieties. There were a few true green apples, some that were mostly red, one variegated, and several crab apple varieties, too. 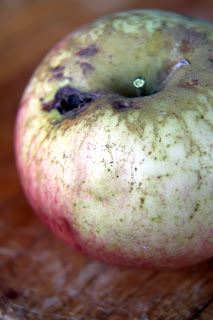 The next day, I invited everyone over, and we had a local foraged apple sampling party. We enjoyed some nice wine, a few local cheeses, and a bounty of apples. It was astonishing to taste all of the different apple varieties side by side and compare notes. Since these were fully tree-ripened apples, each was bursting with flavor and completely unique. There was one apple variety that tasted a bit like pears, one that tasted of honey, and one that had very little flavor compared to the others.

There was a unanimous hands-down winner of the foraged apple tasting. I don't know what the variety is, but if you recognize the solo apple in the picture, let me know (isn't it beautiful?!). I live in an area known for apple orchards 100-150 years ago, but I've never seen this variety here before. The apple is nearly twice as large as the other apples, the size of a softball or small grapefruit. It has translucent whitish-yellow skin with a pale pink blush, and crisp white flesh. The mystery apple has a strong and very floral apple flavor, with a perfect balance of sweetness and acidity.

I think that having an apple sampling party is really great idea for people who are new to foraging. Everyone knows what apples look like, so there needn't be any fear of misidentification, or poisoning, or any of the other things that scare people away from foraging. And it's really fun to sample the flavor and textural differences of fruit ripened on the tree. The experience has left me completely disinterested in store-bought apples. So you can add apples to the growing list of foods that I will only eat in season and harvested with my own hands.