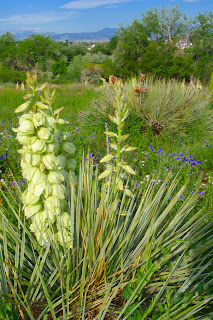 Do you recognize the spiky leaves of the yucca plant (not to be confused with cassava/manioc, also known as yuca)? I can always remember them being a part of my landscape, having lived in a drier area of the US most of my life. But, as with so many foraged foods I was familiar with in my youth, I never knew I could eat them. Learning to forage, I've been amazed to discover, again and again, just how much of what grows all around me is food. It causes me to see my surroundings with new eyes.

The yummiest bit of the yucca (Yucca glauca) is its flower. The petals are thick and succulent, and taste somewhat like a cross between artichoke and asparagus. I prefer to collect one or two flowers from each plant, usually taking pristine flowers from high on the stalk. It is good to make certain the flowers aren't too buggy before you pinch them off with your fingernails.

Raw yucca flowers have a nice crunch. However, I prefer to eat them cooked. I had learned to strip them down to only petals before eating them to avoid bitterness. But over the years, I've found that they my local plants are not bitter, and tend to leave them in tact.

Most of the traditional recipes I found for yucca flowers prepared them in eggs, with a spicy mixture of chiles and onions and tomatoes. I tried this, and it was nice, but completely masked the flavor of the yucca. 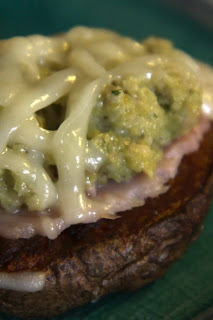 So, in an effort to showcase the delicate flavor of the yucca flowers, I came up with a pesto recipe. I started by putting the blanched yucca petals in the food processor. I added a handful of pepitas, some grated hard goat's milk cheese, a few leaves of parsley and cilantro (not enough to overwhelm), a squeeze of honey, lime juice, salt and pepper, and pulsed the mixture a few times. Next, with the machine running, I added olive oil until it formed a nice, smooth paste.


I guess it would be the obvious thing to do, but I haven't yet tried the yucca pesto on pasta. I have had it atop scrambled eggs. And last night, I put it on top of a browned slices of potato, with a piece of ham, and some jack cheese.