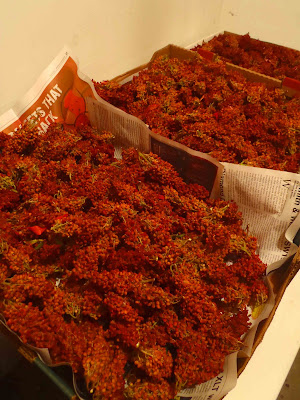 In many countries, traditional foods are prepared for their medicinal effects. In most of these places, the foods prepared were wild foods, that were cheap and easy to come by. By default, they were local and seasonal. One of the problems that we see with a lot of modern ‘fad’ diets is that in order to actually follow the diet, one needs to fork out a whole lot of money. Most of us just can’t afford to do that, especially not in this economy! Not only that, but it seems mighty suspicious that, in many cases, these products that are toted as panaceas have to come from half way around the world-- noni from Tahiti; acai from Brazil; goji from China. We highly doubt that God (or a higher being of your choice) put all of the good stuff in Tahiti, and left us to fend for ourselves until the advent of globalisation. Whether food or medicine, the majority of what we need can be found locally. It might not be trendy, but it will most probably be just as, if not more effective. Wherever you are, you have within your reach an untapped resource: wild foods.

Welcome to the Wild Things Round Up*
We are Butter from Hunger and Thirst and Bek from Cauldrons and Crockpots, and we are here to show you that eating wild foods doesn't need to be a terrifying endeavour, and that our health and our diet need not be dictated by financial status or geographic location.

A few things about us and this Round Up:
1. Wherever you are, you have access to Wild Things, even if it means clandestine trips to your neighbour's yard in the middle of the night**.
2. Foraging is not only for hippies and luddites, though hippies and luddites are both very much welcome (Hi Hippie, Hi Luddite!!). It's easy to assume that everyone who eats this way lives out in the wild, and shuns the material world and/ or technology. But it's not true. This is not a club exclusive to country mice. Bek lives in the middle of a city, and Butter lives in the middle of suburbia. We're both very well adjusted modern women, who love our lives, and happen to love nature as well.
3. We are not trying to be cave people. Though there are plenty of people in the world who successfully and gracefully live a life that is more similar to how people lived hundreds, or even thousands of years ago, neither of us are that person, and we assume that for the most part, you are not either. It's easy to romanticise, but that is a difficult, hard working life. It's also not NECESSARY to remove oneself from the modern world in order to be connected to nature. And, when it comes down to it, is that not really what we all want a bit more of-- connection. To nature, to community, to other people, to a higher power. It's easy to say "well, if I lived in the woods then I'd be connected to nature, but I live in Los Angeles so I can't be." But that simply isn't true. Nature is everywhere. Life is everywhere. It's not outside of your touch, it's not only available to people who make the sacrifice of modern convenience. You do not need to give up your make-up or your latte.
A few foraging rules:
1. DO NOT EAT ANYTHING THAT YOU CANNOT 100% IDENTIFY. We cannot stress the importance of this point. People die of stupidity every day. Let's not win any Darwin awards here.
2. Learn and pay attention to your local laws about where picking is legal.
3. Respect private property. Ask permission. Most people will gladly let you pull up some weeds for them. Most people are delighted to get rid of some of the fruit that rots all over the pavement. Just ask.
4. Don't take more than you need. Never take rare plants. Learn what's in your area-- only take things that are abundant. This is important. Always think of the future, not just in terms of what you want, but in terms of the ecology of the system that you are taking from. These eco systems have been around for millenia, since long before people got there; don't be the one to change that in one generation.
Tools you will need:
1. Scissors
2. Pocket knife
3. A local guide book-- with pictures
4. Bags to collect your food into

How to play:
Every month, at the beginning of the month, we will write about a new Wild Thing. We will give pictures, descriptions, best locations, tastes, and a breakdown of its medicinal uses. We will also list any possible toxicity issues. The plants we pick will be those with few if any toxic lookalikes, and if there are, we will give ample warnings. None of the plants we pick will have any potentially lethal lookalikes. Then, over the next month, we, and YOU, will go and find it, and play with it, and come up with a way to use it. Before the deadline, you can email us a link to your recipe, or if you don't have a blog, submit your recipe by email, and then at the end of the month we will provide a list of everyone's adventures. Sounds fun? We sure think so!
Now, we're well aware that we all live in different locations, so there are likely going to be times when what we are looking for doesn't grow where you are, or is still covered in snow while Bek is prancing around in a bikini in Los Angeles. If that is the case and you REALLY want to play that month, write to us. We can give you suggestions of possible alternatives, or help you find a solution that involves the USPS. Or, just wait till the next month.

*No association with Monsanto.
**Just kidding. We don't advocate stealing. Really, there's no need-- a knock on the door and a "Hey, I noticed that you have an apple tree full of rotting apples. I was wondering, could I take some of them, or pay you for some of them, or mow your lawn for some of them?" Most people are horrified at the thought of taking money for apples, and will drop big bags of them off on your front step for months to come.

------------------------------------------------------------------------
The featured ingredient for the Wild Things Foraging Challenge in the month of October is sumac.  Whoa, Nelly!  Do not fear this sumac, it's not the same one that causes icky allergic rashes.  Edible varieties, including smooth and staghorn sumac, are safe.  In fact, the fuzzy berries of sumac offer up a tart treat which has wide use in culinary applications.  The secret lies in that fuzz, for it's the part which possesses the tart lemony flavor which makes it so great in cooking.  Be sure to harvest sumac before the rains and snows wash the fuzz from the berries, otherwise they are flavorless.

How to Identify Sumac 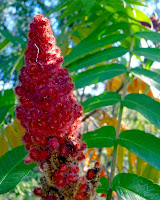 The shrubs of edible varieties of sumac can be from 3-20' tall, and always have pinnate compound leaves (leaves appear in pairs down a central stalk), and end in a terminal leaflet.  The leaflets tend to be long and toothed, and give sumac branches the appearance of feathery fronds.  The fruit of all non-poisonous sumac appear in tightly packed clusters with small seeds.  The smooth sumac of my area has easily identifiable red pyramidal clusters of fruit at the end of branches.  Sumac tends to grow in clusters, or thickets, with the oldest tallest tree in the center.

How to Collect Sumac

Wait until the fruit of sumac have turned bright pinkish-red.  Break away a few tiny berries and taste them to make certain they are nice and tart, as this is what you are after.  Once you've found clusters of tart berries, simply cut them off with a pair of scissors.

Sumac berries can be used fresh, and they dry nicely as well.  Every step of the way, just be certain to protect the fuzziness of the sumac, because that is where all the flavor is.

The flavor of sumac is a straight forward tartness - think lemon.  Sumac can be added to recipes as a part of a spice mix.  Alternately, the berries can be steeped to make a tea, which can also be used in recipes.  To do so, simply place the berries in cold water (hot water can result in a tannic mess), reach in and gently rub them together with your hands to help distribute the fuzzies, and let it infuse for a few hours.  Strain out the solids, and you are left with a gorgeous pink tea that can be sweetened to make sumac-ade, or even made into a syrup.  I like to boil sumac tea over a medium heat until it has reduced by half, to further concentrate it's flavor.

If you are a big fan of curds like I am, you'll love putting a twist on the classic by making sumac curd.  Simply substitute a reduced sumac infusion for the lemon juice in my recipe for Lemon Curd.  Just don't make the mistake of leaving a bowl of it on the counter to photograph, and then forget it's there.  Because you might wake up in a panic at 3am, only to discover that your cat has helped himself to it, and none remains for pictures.  You know, hypothetically, not that I'm speaking from experience.

So, are you ready to play along?  Wild Things is a foraging recipe challenge, and you are invited to participate!  Just send a link to your recipe by the end of the month.  wildthings.roundup@gmail.com
Labels: foraging lemon curd recipe sumac wild about foraging wild things round up