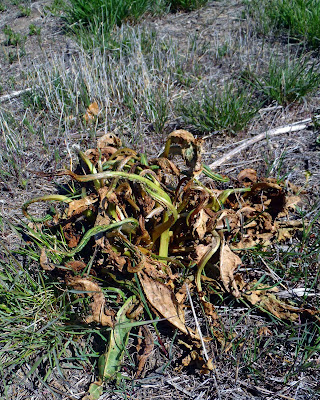 In foraging, it may be more important to know what plants shouldn't be eaten, than it is to know which plants are edible.  When I was out for my ride today, I saw that a lot of the spring growth in the area had been sprayed with herbicide for the first time.  And it made me glad that I'm out on my bike so often.  Cycling my area on a regular basis gives me an advantage here, because I'm intimately aware of which areas have been "managed" by humans, and which are free of their influence.

But even if unfamiliar to an area, you should know how to recognize plants which have been sprayed.  Plants which have been sprayed with weed killer can be green, yellow, or brown.  They inevitably look wilty, but I've noticed that they wilt in a way which makes them look as if they've melted in a fire.  Their stems are often twisted and curled.  This is quite different from how plants react when they've been burned or dried by the sun.  Sun-baked plants simply look dried out and browned, whereas sprayed plants tend to look tortured and deformed.

If you know or even suspect a plant has been sprayed, don't eat it.  Don't eat any plants that surround it, at any time of year, or any year thereafter.  And even if you don't see any of the browning and wilting associated with weed killer, be wary of plants that have absolutely no bug holes, and no bugs around them, as they may have been sprayed with insecticide.


And while you are learning to recognize which plants have been sprayed with weed killer, it's also good to learn which poisonous plants are most plentiful in your region.  In my immediate neighborhood, there is poison hemlock everywhere.  It looks green and inviting, even through a good part of the winter, but it is a plant that shouldn't be messed with.  When I take people out foraging with me, it's one of the first plants I teach them to identify.


None of this is meant to scare anyone.  Foraging can absolutely be done in both a safe and responsible manner, even within city limits.  The lesson here is to know your area, know your plants, and to be informed and observant.

As an interesting footnote to this post, I'd like to add that all of these pictures were taken at a busy playground near a pediatric outpatient clinic.  I find it mind-boggling that they sprayed the bejeezus out of the dandelion, dock, thistles, and mustards, but left the poison hemlock untouched.