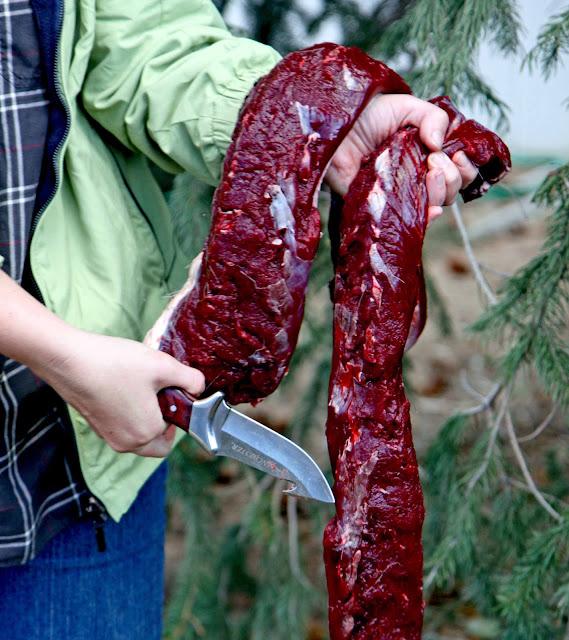 If you didn't read my first post about roadkill, Roadkill is Real Food, please please please do so now. It contains some important info about obtaining a permit, and eating found meat.

It's no secret that deer is my favorite meat. And the vast majority of the deer meat that I eat comes from roadkill. Stop squirming. I'm not talking about little critters squished beyond recognition. I'm talking about magnificent wild deer and elk who have had the misfortune of being hit by a car.
I live in the mountains, where even the summer overnights are cold enough to preserve a fresh kill. And the roads here are managed well enough that it's rare that an animal will be left to lay roadside long enough to rot. The roadkill that I eat is premium meat, finer and fresher than anything you can buy in a store. Just look at that lovely garnet-colored meat!

Sometimes it's nice to go out looking for roadkill. If you do, go in the early morning to take advantage of the overnight kills. Most of the time, it's about taking advantage as the opportunity presents itself. That's why I travel with a cooler, some bags, and a knife in my truck. A pair of disposable gloves are nice, too, but not necessary.

The other day, I was driving up the canyon for a walkabout when I spotted several cars stopped on the other side of the road. As I passed, first I saw the cars and people on their phones, then I saw the dead animal, a deer. The accident had just happened. Since it appeared that no person had been injured and the situation was under control, I decided to come back in an hour, after the ruckus had cleared.

After a quick walk in the woods, I returned to the scene of the accident. I saw nothing. Did someone else snag the animal already? I pulled over and walked the edge of the road. Before long, I spotted the deer, which was a good 50 feet down the side of the mountain.

So, with cooler and knife in hand, I billygoated down the mountain. The deer had landed back-side down on an incline so steep that I could barely keep my footing. But it turned out to be a fortunate thing, because it was nice to be off the road an away from traffic in that steep canyon.

I won't lie to you, it was a little startling to put my hands on that animal for the first time, to feel it's warmth and still-soft flesh. It had been alive just an hour before. It was a buck, which had been impacted so hard that it's antlers were snapped off near the skull. Being that it had taken such a hard hit, I decided to only take the backstraps. They are easy to harvest, rarely sustain major damage, and can be taken without piercing the body cavity (which means that there is very little blood, and no chance of accidentally soiling the meat with urine or fecal matter).

How to Efficiently Harvest Backstraps Roadside

To take backstraps, first pinch up a bunch of skin along the spine, and make an incision with your knife to create a small hole in the skin. Next, slip your knife under the skin, and slit the skin open along the length of the spine from the inside out. Cutting from the under side is important because it helps to keep fur from getting everywhere and also protects your knife from some dulling.

Once you have the skin slit open shoulder to near-tail, reflect it back to expose the muscle. If you're very strong or have a good angle on it, just pull the skin. But I find it easier to pull the skin up with one hand, and gently tease apart the membrane between the skin and muscle with my knife.

Now you should be able to see the backstraps quite clearly; they are the fat muscles that run lengthwise along both sides of the spine. You will harvest them one at a time, using the same method on each side.

First, locate the spine with your fingers. Cut down next to the spine, letting the bones guide your knife, until you hit the ribcage. This will get the muscle halfway free.

Flip the animal over, if necessary, and repeat on the other side. This whole process takes less than half an hour, and is makes so little mess that you can clean your hands with just a small squirt of water. Pack the meat in snow or ice for your journey home.

I'd like to reiterate what I said in my first post about roadkill - always be familiar with and obey the laws in your area.

Eating roadkill is local eating at it's finest. I don't say that in jest. It's one thing to eat food bought in a local store or grown on a local farm. But it's something truly special to eat food, plants or animals, that have lived wild in your area. It creates an immense sense of connection to your home. When you harvest your own wild foods, you can't take for granted their place in the land, right next to you. They are no longer things, there for your consumption. Suddenly, what it means to be of a place, and to eat locally, goes from being a concept to a fully realized experience. I know my food is local. I saw it with my own two eyes, cut it from the bone with my own two hands.

As I mentioned, the deer that I harvested the other day was newly dead, still warm. When you cut into an animal like this, you can't deny for even a second that your meat comes from an animal, not so unlike yourself. That animal lived and breathed and had a life all it's own - a life which is no more or less important than your own. Harvesting meat is messy and it takes time, and it makes you think about the life of the animal from which it came. As it should be! I suspect that the disconnect which buying packaged parts creates is part of the larger problem we have as a culture that creates malnutrition and obesity.

I think that this is a very important thing to realize, as a meat eater. How easy is it to carelessly toss those last few bites of a fast food hamburger into the trash? But when you have looked at the face of the animal whose flesh you are eating, that kind of waste is nearly impossible. Harvesting your own meat creates great respect and mindfulness, and taking in that flesh is a kind of communion.

And so, before I cut into that buck, I took a moment to thank it for it's life, which would pass between us and feed me and my family. I placed a few leaves of oregon grape onto its forehead and felt the gravity of this interchange.

And in the weeks to come, as I eat that deer's flesh, I will again think of it's life and feel thankful, each bite a kind of prayer. If you ask me, this is the finest source of nourishment - not the meat itself (which is surely organic, grass-fed and abundantly nutritious), but food taken with absolute gratitude and pleasure.