Get Your Forage On! It's Still High Summer in the Mountains 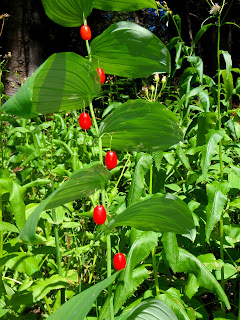 Where I live, at a lower elevation, summer has burned most of the vegetation to a crisp, and is fading fast. However, on a hike in the mountains last week, I was rather shocked to see that it seemed as if summer was still peaking there. I had expected a nice hike, hoping to find a bite or two to eat along the way. But my attention was constantly being swept off the trail. There was food everywhere! There were the raspberries I mentioned in a previous post, as well as several varieties of currants. I was also delighted to see the ripe red berries of a plant called twisted stalk (Streptopus amplexifolius). They hang from the main stalk like xmas ornaments from a tree. The fruit is delicate and a little mucilaginous, and tastes somewhat like an acid-free tomato, or a cucumber-like persimmon. 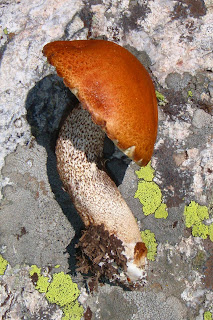 Aspen orange cap mushrooms (Leccinum insigne) were starting to pop out of the ground. These used to be widely eaten, and there are many who still enjoy consuming them today. However, due to some reports of known mushroom experts becoming ill from this species in recent years, this is not a mushroom I consume. 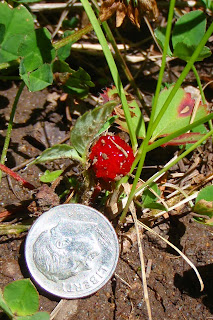 As tasty as the other foods were, I was most excited to find tiny wild strawberries (Fragaria sp.) dotting the hills. Smaller than the tip of my pinkie finger, they're a flavor giant. One of my favorite childhood memories is of waking up in a tent, my ears and nose chilly from the mountain morning, and sneaking out with my dad to collect a handful of wild strawberries to put on our granola. Just one taste of the nearly microscopic berries brings that memory back full-force, my dad young and strong, and me carrying pj's and a beloved sock monkey in my backpack (because I had to pull my own weight on these expeditions).

Thanks to being inspired by my friend Fairybekk at Cauldrons and Crockpots, I also collected plants for their medicinal qualities for the first time. Yarrow, mullein, and horsetail were calling to me, so I harvest them and made tinctures. If you find this as fascinating as I do, then you'll be very interested in our upcoming foraging challenge.