Pernod's Not in the Budget - Star Anise Extract 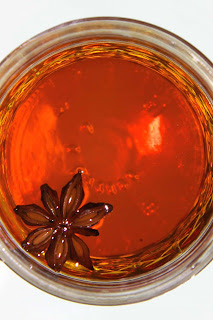 I've been wanting to buy a bottle of Pernod for a few years now. A local resto makes mussels steamed in a Pernod-cream sauce which is so heavenly that not a single drop goes uneaten, ever. I can see making all sorts of fish and seafood dishes in a similar broth. But every time I schlep into a liquor store, determined to buy a bottle of Pernod, I leave empty handed. Why? Because, for the life of me, I can't justify spending close to $30 for such a tiny bottle of alcohol.

I finally decided to compromise by making a homemade star anise extract, since that is the dominant flavor in Pernod. The method is simple, and can also be used to make homemade vanilla. Place some star anise in a glass jar (I picked through my bag and used all of the broken pieces since they weren't as pretty), and cover with vodka. Seal the jar, and leave it in a cool dark cupboard, shaking occasionally. After about a month, filter it though a coffee filter. How easy is that?

So far, I've only cooked one small piece of fish with the extract (and some butter), but I can report the flavor was very nice. It would also be lovely in coconut shrimp soup.