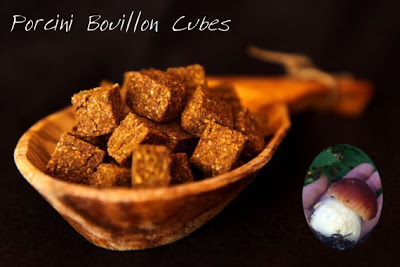 I mentioned previously that porcini mushrooms have overtaken meat as my favorite soup base.  I'm in awe of the way so few dried mushrooms can yield such an astonishing amount of savoriness when re-hydrated.  I was fortunate enough to forage many porcini mushrooms (Boletus spp.) over the summer, and I am able to take advantage of that flavor at every turn.  Porcini broth is now the backbone of nearly every soup I make.  It also shows up in my risottos, sauces, and gravies.


Dried porcini create a delightful broth all by themselves.  Many chefs call the soaking water from re-hydrated porcini mushrooms liquid gold.  However, with just a few tweaks and additions, basic porcini broth can be pumped up and transformed it into something so tasty that it seems some sort of magic is involved.  Through many months of tinkering, I've come up with a recipe for subtly enhancing the rich qualities of basic liquid porcici gold that is so scrumptious that I'd be proud to serve it to anyone. You can read about it in this post about porcini ramen.

My porcini soup base is so utterly delicious that I decided that I wanted to try to convert it into an instant, portable version.  A few months back, my foraging buddy Pascal introduced me to his method for making dried soup cubes from nettle and potato.  A light bulb went off.  It should be a piece of cake to make similar dried cubes, bouillon, from mushrooms.  Certainly it would be easier than trying to engineer a meat-based bouillon cube at home.

Porcini bouillon cubes turned out to be shockingly easy to make.  They require only a few ingredients, and very few tools to create something ten times tastier than anything you could buy at a store.

Porcini bouillon cubes make a soup that is good enough to stand on its own.  At times when I only need a light snack, I brew up a small cup of soup to sip using my porcini bouillon cubes.  These cubes can also be used to add a quick boost of savory flavor to pretty much any soup or sauce.  I've taken to calling them umami bombs.  Because they are dehydrated and lightweight, porcini bouillon cubes are a perfect food to take along on camping trips, hikes, and other outdoor adventures.  They also make a nice hot lunch for office stiffs who only have access to hot water while at work.

In honor of my friend Erica, who sometimes goes by her foraging superpower name, Wild Food Girl, I started making up packages of "instant" soup.  She works a hectic day job, and often doesn't have time to put into cooking elaborate meals. All I do is vacuum seal three porcini bouillon cubes (for two cups of water), a nest of thin dried noodles, and a handful of dehydrated vegetables (I use dried nettle, wild onion greens, and milkweed pod slices, but any dried veg will do) into a bag, and write instructions on the outside. Voila, a portable little package that can be turned into a meal in minutes.

1. Use a spice grinder (you could also use a mortar and pestle, but in this case, I prefer the efficiency of a spice grinder) to buzz your dried porcini mushrooms into a fine powder.  You will probably need to do this in batches.  Sift each batch through a fine sieve and into a bowl.  Return the larger pieces which haven't passed through the sieve to the grinder, until all of your mushrooms are ground.

2.  Add the dried ground wild onion, salt, and gelatin to the bowl with the mushroom powder, and fully incorporate the ingredients by stirring.  The gelatin will help the porcini bouillon dough stick together when it is wet, and will give the reconstituted soup a silky sensation in your mouth.  If you don't have wild onion, I strongly recommend using your own homemade dried onions.  My mom used to dice onions, lay them on a baking sheet, and stick them into the oven after she'd baked anything and turned off the oven.  The residual heat dries them out easily, gives them a light toasting, and fills your house with a lovely aroma.  Commercial onion powder just can't compare to all of that toasty complexity (but will do in a pinch in this recipe).

3.  Measure the fish sauce and soy sauce into the dry ingredients, and this time use a fork to start to smush everything together.

4.  Add approximately 2 Tbsp. of water, and continue to mix everything together with a fork.  The idea here is to use just enough water to get the ingredients to pull together.  This will make dehydrating the porcini bouillon cubes much faster.  The raw material should have the consistency of a very stiff dough, like Play-Dough, or corn tortilla dough.

5.  When it looks as if all of the ingredients have finally come together,  knead the ball of porcini dough between your hands for a few seconds just to make certain that it is evenly moist and sticky.

6.  Several years ago, I bought a mold for Jell-O jiggler jelly beans at the thrift store.  I thought it would be good for making all sorts of pastilles and such.  I dug out that mold for the bouillon cubes, but it seemed like the porcini bouillon stuck to the mold just a bit too much, and I didn't want to use any grease or water to keep them from sticking.  Here's what I ended up doing instead.  I used my hands to pat the dough into something square-like, then tapped each of the four flat edges on a cutting board to make the square square-er.  I then used a rolling pin to very gently roll the porcini bouillon dough to 1/2", carefully lifted it with a spatula, and once again tapped the edges on the cutting board to make a respectable square.  Then, I used a knife warmed under hot water and towel-dried to cut the dough into 1/2" cubes.  This recipe makes approximately 40 cubes.

7.  Dry the porcini bouillon cubes in a dehydrator (or an oven or strong sunlight) for at least 8-10 hours at 125 degree (F), or until you are darned certain that they are completely dried (this may take many more hours in humid climates).  You will cry your eyes out if these little stinkers go moldy in storage, so go the extra mile to make sure the cubes are dried through and through.  Store porcini bouillon cubes in a cool dry place, out of direct sunlight.

8.  To make porcini bouillon, pour 6 oz. boiling water over a cube, and let it soften and brew for at least 3 minutes, stirring occasionally.  You may need to smash the cube with the back of a spoon as it rehydrates.  The porcini bouillon cube will never dissolve completely, instead it will make a cloudy broth with debris that settles at the bottom.

You can also see this recipe appearing on Punk Domestics (ye-ah!) and Real Food Wednesday, and Dehydrator Recipes Thursdays.   Share the love.