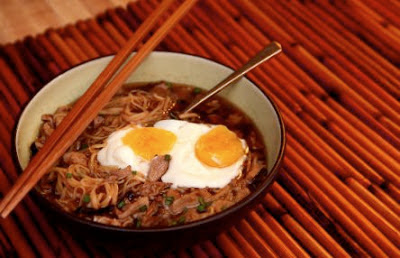 I'm certain that by now you've heard the culinary buzzword, umami.  It's a Japanese word used to describe the fifth taste -- savoriness (along with sweet, sour, bitter, and salty).  Browned meat, tomatoes, Parmesan cheese all tap dance on the umami taste buds in your mouth.  Whereas most people have a sweet tooth, I most definitely have an umami tooth.  So you must understand that when I say that broth made from foraged dried porcini is one of the most transcendental foods that has crossed my lips, it is with gravity.

I am a lover of meat, and consider meat stock to be my greatest culinary building block.  Let me tell you right now, porcini broth is superior to even meat stock.  Boiled up with just a few other ingredients, mushrooms make a broth so complex, so deep, so rich, so savory, that you will dream of it, you will be haunted by it!

If you have the opportunity to forage your own porcini mushrooms, like I do, then make certain you have enough to get you through the winter.  If not, I honestly believe that dried porcini, as expensive as they may be, are worth buying.  I can tell you with certainty that they are a far better investment than canned broth or bouillon muck.

This humble bowl of soup is a stunner, one of the best things I've cooked all year long.  I've probably eaten it for half of all of my meals in the last two weeks.

1.  Use whatever amount of dried porcini you can afford.  I like to use about one small handful per person, broken into pieces.  Depending upon how soupy you like your noodles, start simmering the mushrooms with 1-2 cups of water per person.

2.  Sprinkle some wild allium powder, soy sauce, and fish sauce (less fish sauce than soy sauce) into the simmering mushroom soup.  These ingredients are both meant to bump up the umami-quality of the broth, not to make it salty.

3.  Taste your porcini broth.  Add some salt, and taste again.  Keep adding salt until you are satisfied with its seasoning.

4.  Soften 1 tsp. of powdered gelatin per person served with a tablespoon of cold water.  After about 5 mintues, add this to the mushroom broth.  It will give your soup a sticky unctuous quality that it is missing from not containing animal fat.  Trust me, you won't get as much satisfaction from slurping your noodles without it.  I'm tempted to say that the gelatin is optional, but really, it isn't.

5.  After about 10-15 minutes of gently simmering, you're good to go with the noodles.  Add one bird's nest of dried noodles per person, and cook them until they are pleasantly springy-chewy done.

6.  Pour the whole mess into a bowl, anoint with a few drops of sesame oil, lay a sliced slow-cooked egg on top, and snip on some fresh onion-y greens.  Add some crystals of your very best salt to the egg yolk.

7.  If you'd like to beef up your soup, add bits of leftover meat, fishcakes, pickles, whatever you please.  The ingredients listed are the bare minimum.

8.  Get your slurp on!  No, seriously.  You've gotta feel the pleasure of inhaling these savory noodles into your mouth.


I was so determined to make the slow cooked soft eggs featured in Momofuku.  I wanted those fabulous rich amazeballs for myself.  I faithfully followed the directions - brought a big pot of water to heat, put in my steamer basket to keep the eggs from touching the bottom, held the temp between 140-145 degrees (F), and let the eggs-in-shell bathe in the water for 40-45 minutes.

I ended up with the fanciest raw eggs in the world.  Oops, failed to account for the fact that I live at altitude.  If you live at sea level, no doubt this method works well.

I ended up consulting my friend, chef Rosa Rajkovic.  She told me to bump up the temperature by 15 degrees.  My second attempt was a success.  These eggs are perfect for lovers of rich eggs, because once cooled in ice water, they'll hold in the fridge for days.  To serve, heat them under hot tap water for a minute, then crack them out of their shells.
Labels: boletus edulis mushrooms boletus edulis recipes Boletus rubriceps david chang dried porcini mushrooms foraging foraging porcini mushrooms momofuku porcini ramen ramen wild edible mushrooms