Wild Food Girl jokes that whenever we ponder digging up burdock (Arctium spp.) roots, I hand the shovel to her. This is because I find digging burdock roots from our hard clay soil to be an unpleasant, if not nearly impossible task. Worse, the burdock roots harvested from here are not long and fat. They are gnarled and spindly. For the most part, I've given up burdock roots as a food not worth the effort. I realize I probably get bad forager points for saying that out loud.

It's such a typical story in foraging. Just when you've given up on something, you find greater success. This happens to me all the time when mushrooming. It's not until I'm about to call it a day that I stumble into glittering jackpots of fungi. So, too, with burdock. Just when I'd written off the plant, I was awakened to a new way to enjoy it. Thanks in large part to Leda Meredith, who is very enthusiastic about it, my eyes were opened to the great potential of another part of burdock - its flowering stalks.

The plant has been staring in the face the whole time, an abundant source of really good food. I half want to smack myself in the head. Sam Thayer mentioned eating burdock stalks in the Forager's Harvest (2006), which is a book I've read many times over, but the pieces didn't connect for me. I ate burdock stalks for the first time last year and for some reason, wasn't dumbstruck with love for them like I am this year. This may well be my new favorite vegetable. It's that good. I have to smile at how foraging always gives me something new to be excited about.

How to Harvest Burdock Stalks

While you may not immediate recognize the burdock plant, if you spend any length of time outside, you will likely know the prickly spherical burs of burdock because you've had them stuck into your clothes or your pet's fur at some point. Rumor has it that burdock burs were the inspiration for velcro. As someone who has had a fair share of the tenacious burs lodged into my pants, socks, shirtsleeves, bags, and more, I can see how that story came about.

When seeking burdock in the spring and early summer, you will almost always see its burs on the ground, which will help your ID if you are unsure. Many think that the leaves of burdock call to mind those of rhubarb. They are indeed large and grow on long petioles, though the leaves of burdock tend to be slightly more elongated than those of rhubarb, and they are white and felt-like underneath. Additionally, the leaf petioles of burdock are strongly grooved, calling to mind celery, not the glossy smooth petioles of rhubarb.

Some report having eaten both leaves and leaf petioles. I've found neither to be worth the effort to overcome their bitterness and texture. For my time, the best value in burdock is in its central flowering stalk. The trick is to catch the burdock stalk when it's grown tall, but hasn't yet started to make flowers. The ideal burdock stalk will have leaves originating all along it, and some new leaves emerging from the top, but no flowers. Burdock stalks are deeply grooved, green, occasionally with bits of pink, and are usually at least partially covered with a light layer of white fuzz that can be rubbed off with your finger. I've picked them anywhere from 1-2.5' long (topmost leaves and leaf petioles not included), and all were agreeable in flavor. So long as they've not yet sent out flower buds, the top few feet of even taller stalks may be harvested. You'll know immediately upon cutting a burdock stalk if it's too tough to eat. If it feels like you are trying to cut into a tree branch, not a sturdy vegetable, move on. The larger burdock stalks are easier to peel and give a bigger bite of food, so it is a bit of a game to strike the balance between getting the biggest stalks you can find while keeping an eye out for tenderness.

To harvest burdock stalks. use a pair of snips with a curved blade or a knife and cut the stalk as close to the ground as you can manage. Burdock stalks can be quite thick at the base. While still in the field, cut all leaves from the stalk. Burdock rarely grows in isolation. You are likely to find a fine big patch of it, and harvest many stalks with just a few minutes.

How to Prepare Burdock Stalks 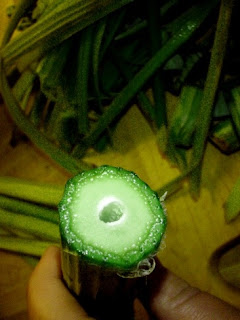 Turn your burdock stalk and look at the thick cut end. You will see a clear division between the darker green stringy outer layer, and its creamy pale green interior. Your goal in preparing burdock to eat is to remove all of the stringy green layer because it is bitter. I believe this is best done with a paring knife. Use your paring knife and thumb to grab and strip off chunks of the bitter green lengthwise. If the burdock is freshly cut, this process is quite easy. For some reason, if the burdock has been in the fridge for a day or longer, this process is harder. You may need to use your knife to further cut off any of the stringy bits. If you hold your burdock stalk up to the light, and see any grooves on the outside, keep stripping away the stringy layer. The last little stringy bits aren't as bitter as the outside, but they do turn brown more quickly than the interior of the burdock stalk. You are looking to have just the perfect pale interior remaining. Don't make yourself crazy cleaning the burdock, however. This should be a fairly quick task. If you are processing a large amount of burdock stalks, or want to leave them sitting for a bit before you cook them, place your cleaned burdock in a bowl of water to which a heavy squeeze of lemon has been added. This will keep the burdock from oxidizing, which turns the outside brown.

Once they've been cleaned, burdock stalks can be kept whole or cut into chunks, depending upon how you want to use them in a recipe. Either way, I prefer to prepare them for recipes by boiling them in salted water (salt the water somewhat heavily, the way you would for cooking pasta).  When I was researching, some sites said the salted water helped to tame the bitterness of burdock. I've boiled them in both salted and unsalted water, and have found no difference in the bitterness. In fact, I've not found that there's any bitterness that I'd want to remove in the burdock that I've cleaned it properly. It does have a faint bitterness, though I find it to be pleasant, just like the vegetable to which it is often compared, artichoke.

Raw burdock stalks taste faintly starchy. Burdock stalks, if boiled for just 2 minutes in salted water, retain a nice crunch. Boiled 8-10 minutes, burdock stalks get tender, but not mushy. Boiled burdock stalks can be used immediately, keep in the fridge for several days, or be put into the freezer to be enjoyed later.


The flavor of burdock stalks has been widely compared to artichokes and cardoons. Use that as a jumping off point when choosing how you'd like to enjoy your burdock stalks. Your first time eating them, enjoy burdock stalks simply, dressed only with butter (or olive oil), salt and pepper. Next up, try dipping cooked burdock stalks in bagna cauda (this is a strong contender for my favorite way to eat burdock) or tossing chopped pieces with a homemade vinaigrette.

From there, the sky is the limit when it comes to cooking with burdock stalk. Look up recipes for artichokes or cardroons, and substitute burdock. Use them where you'd normally use broccoli or potatoes. Serve burdock as a simple side, warm or cold. Throw burdock stalks into any old salad, soup, or egg dish you are making. Here are the ways I've tried eating burdock stalk thus far, all of which were good.

-battered and shallow fried
-layered with béchamel sauce and cheese, topped with breadcrumbs, and baked
-finished in tomato sauce with a dusting of hard cheese
-cream of burdock soup
-mashed together with potatoes
-in a Persian-inspired stew with lamb and potatoes
-chopped into a tapenade with capers and lemon zest
-burdock barigoule
-with a pecorino vinaigrette
-dipped into parmesan black pepper yogurt
- cooked in a mock beef and broccoli stir-fry
-as a warm salad with caramelized onions, pine nuts, and a squeeze of lemon
-Leda Meredith's marinated burdock pickles