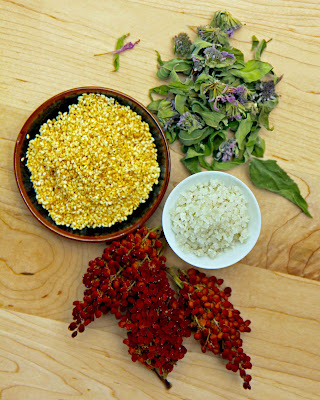 Last week, I spent several hours immersed in a sea of red leaves and berries in the golden autumn light of the Rockies, picking sumac ahead of an approaching storm.  Living here as long I have, I know well how quickly the fronts come in, and how snow forces a change in the foraging landscape.  Still, at the time, I had quiet doubts, wondering if I really needed to rush to collect sumac.

But this morning when the clouds lifted, and I saw the blanket of fresh snow covering the very spot in which I had harvested the sumac berries, I knew I had made the right choice.  To affirm this, I padded downstairs to my pantry, where the entire top of my chest freezer is covered in clusters of the fruit, and popped a few tart berries into my mouth.  Yep, good call, because this year's sumac is super sticky and tart, quite nearly ideal.  The snow storm surely washed away much of what is tasty on sumac, the oozing sap and surface fuzz.

To celebrate the bounty in my pantry, I decided to make za'atar, a Middle Eastern spice blend which often relies heavily up upon sumac.  I used some of the monarda fistulosa (aka wild oregano) that I picked over the summer in my mix, but you can use any dried herb that you enjoy, particularly ones which have a oregano, thyme, or mint-type flavor.  I also added dried nettle seeds because I happened to have them on hand, but I understand that this is an unusual ingredient, and the addition is completely optional.

Grind the sumac, mondarda fistulosa, salt, and half the sesame seeds using a mortar and pestle, until the mixture resembles coarse sand.  Alternately, pulse the ingredients in a spice grinder, being careful not to over mix (which could result in sesame butter).  Stir in remaining sesame seeds, and the nettle seeds.

Za'atar makes a wonderful all-around table condiment, and is also delicious when used as a rub on meat, or as an addition to vegetable recipes.  When combined with olive oil, it makes a great marinade or topping for bread.  And if you're feeling adventurous, I highly recommend using za'atar on popcorn.

We're highlighting sumac at the Wild Things Round Up this month.  Do you have a sumac recipe that you'd like to share?  If so, send a link to wildthings.roundup@gmail.com

I'm sharing this recipe with Fat Tuesday at the Real Food Forager, and the Hearth and Soul Hop.
Labels: foraging spice blends sumac wild about foraging wild things round up za'atar