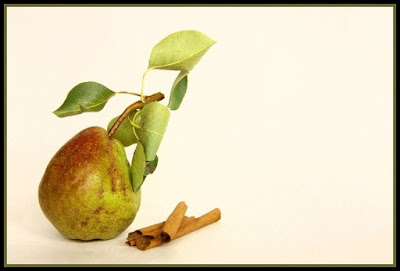 I've spent the last two months pouring over pear recipes, trying to decide how best to preserve the crop. You see, two out of the last three years, there's been no fruit to harvest in autumn thanks to our erratic spring weather. I always think that I don't much care for fruit until we go a year without. This year, I could see early on that we would have a decent amount of both apples and pears. Fearful of going another year without fruit, I knew that I'd put up as much as time would allow. But how? Especially given that sweet sauces, jams, and jellies languish on my pantry shelf because I'm missing a sweet tooth. I briefly tinkered with the idea of doing a juniper-spiked pear sauce to serve with meat. It was so-so, but I wouldn't want to preserve more than a few half pints that way. I scoured the internet for delicious-sounding recipes like Mrs. Wheelbarrow's caramelized pear jam. Weeks and weeks passed, and I tired myself out from running around in circles in my head.

Push came to shove last week after I harvest four different pear trees and was faced with a garage filled with flats upon flats of pears. I already knew that I wanted to put up most of my apples as simple dried apple rings. After years of fiddling with apple recipes, I found out two years ago (the last fruit year), that dried apples were the slam dunk hit of my household, guaranteed to be eaten by everyone. Really, I only came to that conclusion after I ran out of gas for preserving apples, but refused to put any into the compost. So, the lowest-energy solution was to leave their skins on, send a corer through their bellies, and slices them into fat pieces to dry. Why did it take me so long to figure out that's our favorite way to eat preserved apples? I supposed my sense glazed over with visions of all the applesauce, apple pie filling, and jelly I remembered on my Gran's pantry shelves.

It begs the next question - why have I never before dried pear slices? I guess I thought they'd be grainy. Who knows? Knowing I had a boat-load of pears in the garage, I tried an experimental batch of dried pears over the weekend, slicing up just eight of them, and putting them into the dehydrator overnight. Fearing they'd be bland, on a whim, I sprinkled 2/3 of them with cinnamon sugar before sending them to bed to dry. I didn't have high hopes. I simply thought it would be a satisfactory way to put up part of the crop, for the sake of variety.

My bad. Dried pears are fantastic, particularly the ones dusted with cinnamon. I gave a few to my buddy yesterday, and she remarked, "These are like pie!" So, my conundrum of how to preserve pears is solved. I will be saving all of them in this manner. Sometimes the simplest recipes are the best.

For this recipe, try to select pears that are starting to ripen, but are still firm. This will make both peeling and slicing easier. I think these dried pears are just fine with the skins still on, but the rest of my clan prefers them with skin off. The choice is yours.

1. Prepare a bowl of cool water that has been acidulated with lemon juice. I won't lie to you. For jobs like this, I use the kind of lemon juice that comes in the squeezie bottle. The goal here is to have enough lemon juice in the water to keep the pears from turning brown.

2. Peel your pears using a vegetable peeler. Cut out the core and any brown spots. Slice your pears into pieces 3/8" thick. I like cutting them to this thickness, as there is still some substance to them once they are dried. If you choose to cut them thinner, they'll turn out more like chips.

3. Place the pear slices into the acidulated water, and let them hang out there for 15 minutes.

4. Pour the pears into a strainer so that they aren't totally dripping wet.

5. Arrange your pear slices on dehydrator trays. You can pack them in fairly closely, just make certain they aren't touching.

6. While the surface of the pear slices is still damp, but before you stick them into the dehydrator, sprinkle them with cinnamon sugar. To avoid making a mess, do this over the kitchen sink or outside. Use whatever ratio of cinnamon to sugar you enjoy. I used about 1 tsp. of cinnamon to 2 Tbsp. of sugar. A light dusting will do.

7. Dehydrate the cinnamon-dusted pear slices for 12-18 hours at 135˚ (F). I live in an arid climate, so most of mine are done after 11-12 hours. If you need to use an oven to dry your slices, check out this recipe from my fellow forager, Leda.

8. Let the slices cool completely, and give them a quick check to make certain the fattest slices are thoroughly dried, before storing them in an air-tight container.