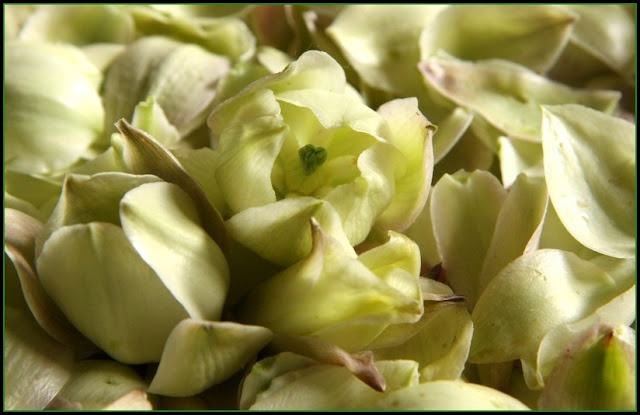 I've gotten out of the habit of posting here regularly. It's not because I'm no longer foraging or cooking with wild foods. On the contrary, I'm more consumed by these topics than ever. Part of the problem is that when a plant comes out, I want to make my old standbys recipes. Purslane just got big enough to eat, and the first thing I want to make with it is purslane potato salad because I've been craving and eating it for years. The other part of the equation is that I only want to post recipes here these days if they are truly something to get excited about, the kind of dish that I want to eat every single day until the season runs out.

On that note, I present to you the utterly crave-able yucca flower quesadillas.

Something clicked for me last week, and I finally figured out how to best make use of yucca flowers. I pick waxy non-fragrant Yucca gluaca here and have in the past, found them to be best used as an oil pickle in the style of marinated artichoke hearts. Otherwise, I never managed to use yucca flowers in a way that wowed me. While lounging in the shade last weekend, I read a brief sentence regarding yucca in Dolores Latorre's Cooking and Curing with Mexican Herbs that got my wheels turning, "A bit of flour can be added to the drained (steamed) petals, patted into small cakes, sauteed, and served with tomato sauce."

As instructed, I sprinkled some flour into steamed yucca petals. This made a gluey mess, as you might expect. But I continued on and attempted to make something like a patty and careful put it into a hot pan with oil to saute it. I quickly discovered that cake had no interest in holding its form, so I smashed it down with my spatula in order to maximize surface area for browning on both sides. Out of the pan, I tasted my flattened yucca pile. It still had a gluey quality, but the added flour made it so the yucca picked up a bit more flavor from browning than would happen by sauteing it sole. The result was savory and good, with some pleasant bitterness, not unlike one would taste with artichoke. But it wasn't quite right on it's own. To salvage my meal, I stuck it between two tortillas with some quesillo and made a quesadilla. Holy moly, some magic happened with the browned yucca with the cheese, and the quesadilla was one of the best I've ever had.

I returned to the recipe the next night, and instead of using pastey flour with the steamed yucca, I tried mixing it with dried bread crumbs, as well as adding some onion powder, salt, and pepper. It quickly became obvious that this version wouldn't hold as a patty, but I didn't really think it needed to, as I intended to put it into quesdillas once again. Once sauteed to a medium brown, the yucca was exquisite. Tender yucca petals were enhanced by the crispy browned bread crumbs and seasonings.  I served these yucca flower quesadillas with dinner, and everyone preferred them to the tacos I also served.

The crispy sauteed breadcrumby yucca flowers are so good on their own that I'd serve them as a side dish, or atop pasta to preserve the crunch. You might think it goofy that I'd put all of that crunch into a quesadilla that turns it all soft again. As I mentioned before, however, the browned breadcrumbs add an additional layer of flavor inside the quesadillas.

It's traditional to remove yucca petals from their reproductive parts before eating. I always thought this had to do with bitterness, and detected no additional bitterness from consuming them cooked, nor any ill effects. Wild Food Girl pointed out, though, that the reason some avoid the pistils and stamen may possibly be due to their high saponin content. Good to be aware of. Proceed with good judgment and while listening to how your body responds to yucca flowers, as is the case with all wild foods. 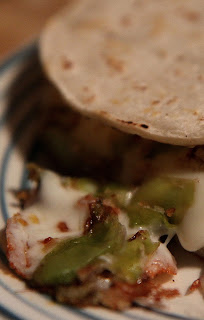 dry breadcrumbs
onion powder
salt
pepper
tortillas (I like corn, but use flour if you prefer)
queso Oaxaca*

1. Steam the yucca petals just until they turn to a translucent shade of pale green. Let them cool to a lukewarm temperature.

2. In a bowl, sprinkle the steamed yucca petals with salt, pepper, and onion powder. Pick up a few and taste them to make sure they're seasoned to your liking.

3. Toss the seasoned yucca flowers with some breadcrumbs. You want to use enough breadcrumbs to absorb the excess moisture in the yucca, without the dish being taken over by bread. Eyeballing it, I'd say no more than one part breadcrumbs to every four parts yucca petals.

4. Add a spoonful of oil to a saute pan, and heat it to medium.

5. Add the yucca and breadcrumb mixture to the pan, spread it out, and cook it, stirring occasionally, until most of the breadcrumbs take on a medium brown color. Pour the mixture into a bowl.

6. In the same pan, still over medium heat, construct a quesadilla by layering a tortilla with the yucca flower mixture, and some cheese. Put a lid on the pan, and cook the tortilla (whether you fold, or top it with a second) on both sides until the cheese is oozy. Serve immediately.

*If you can't find this particular cheese, substitute mozzarella. The mild milkiness of these cheeses is beautiful when paired with the pleasant bitterness of the yucca. Monteray jack or cheddar aren't nearly as nice here, but use what you have.