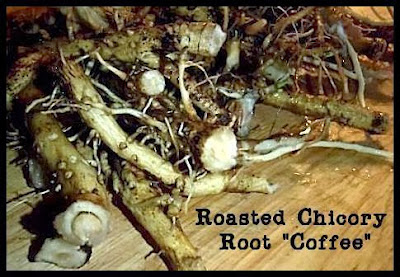 I'll be the first one to tell you that making roasted chicory root coffee takes some work. Making roasted chicory root coffee requires first digging up the roots of a plant many consider a weed, then scrubbing them clean, cutting and drying them, roasting the scraggly chunks, then finally grinding them. If you are used to drowsily dumping regular ground coffee beans into a pot in the morning, then hitting a power button to arrive at a tasty brew, you might wonder why someone would go to all the trouble.

You will know the answer when you hold your first steaming mug of roasted chicory root coffee in your hands. Although it has much of the toasty, rich, bitter flavors we enjoy in coffee, all without a lick of caffeine, chicory root is lovely in its own right. When roasted and brewed, it is also ever-so-slightly sweet, with definite hints of chocolate.

The first step in the process is to dig chicory root. If you are unfamiliar with chicory, the leaves of its basal rosette look quite similar to those of dandelion. Although if you inspect them carefully on the underside, you will see hairs along the midrib of those leaves. For foragers new to the plant, it is perhaps easiest to start watching for its zig-zagging stalk and blue-purple flowers whose rays have jaggedy tips, in the summertime. That way, in the following autumn and spring, the ideal time to dig roots, you will have a better idea exactly which plant to dig. In theory, you can eat young wild chicory roots as a vegetable, but that isn't how I prefer them. If you are only using the chicory to roast for a beverage, the roots of any plant, even those which have already flowered, work just fine. In fact, dried chicory flower stalks, with their tell-tale dried flower bracts, can be spotted from afar, and can help you identify which plant to dig. Where you find one chicory plant, you will likely find many. They especially favor disturbed soil. That is to say, places that humans monkeyed around in, like trails and lots, and fields that have been dug up for various reasons.

I live in an area with dense clay soil, and find it easiest to dig chicory roots after it has rained or snowed, and the ground is wet. I take a big shovel out into a field, find old dried chicory flowering stalks which usually have some green leaves growing at the base in all but the coldest of winter, and start digging. I find that small plants and roots are easier to chop, but I'm not terribly picky about which plants I dig. I do leave the leaves attached to the roots until I get home. This ensures that I'm accurately able to select only chicory roots, and not other roots I may have accidentally dug at the same time. Before returning home, I try to refill dirt into all of the holes, just because I think that's a respectful thing to do.

Once home, I take to the task of cleaning the chicory roots. I first cut off the green leafy tops from the roots, saving the leaves to eat if they aren't too bitter, and most definitely saving the crowns, which are like tiny escarole. I then fill a bucket with water, dump in the roots, and start working them with a scrub brush. This part of the process isn't very glamorous, as it requires sloshing around in muddy water for quite some time. A tangle of wild chicory roots that have grown in tough soil aren't nearly as easy to clean as  store-bought carrots. After all of the chicory roots have been scrubbed in the bucket, I give them a final rinse in clean water.

Then next step is to chop up the chicory roots to be dried. The most important part of this step is to try to cut nearly equal-sized pieces. This will come into play during the roasting process, where smaller pieces tend to burn before the larger pieces roast. So, it's good to cut the roots as evenly as possible. How big? Well, keep in mind that they will shrink during the drying process, and that smaller roasted pieces will likely be easier to grind. I'd say the pieces I cut for my last batch were no bigger than a candy corn (I say that because it's nearly Halloween and I'm looking at a handful of candy corn on my desk).

I learned from Sam Thayer's account of roasting chicory to dry the roots first, instead of directly roasting them. Why? Well, if you put a bunch of fresh chicory roots into the oven to roast, it takes longer, and you are more likely to get uneven results. So, I simply stick my cut chicory roots in the dehydrator overnight. They could also be air-dried or dried in the oven on very low heat, if those are your preferred methods. Once the roots are dried, they needn't be roasted right away. I'd think they'd store nearly indefinitely until you're ready to roast.

I find roasting to be the trickiest part of the process. It seems obvious when you're just talking about it, what roasting a root might be like. But when you're in the act of doing in, and have just put many hours into the process, the difference between roasted and nearly-burnt isn't as obvious as first imagined. From my own experience, I prefer to roast the roots at a lower temperature, like 300˚ (F) for a longer period of time because I feel like it gives me a greater level of control over the process. I spread the dried chicory roots out on a baking sheet in a single layer, and place them in the hot oven. I've found the roots turn a pretty impressive shade of brown after 20 minutes. After that point, I set a timer for 10 minute intervals, and keep poking my head in the oven. The last batch of chicory roots that I roasted took about an hour. But I've had them take as little as 40 minutes, and as long as an hour and a half. I pull them out of the oven at the point where they seem to be releasing the tiniest bit of smoke, although their color never seems to darken much past the color they achieve in the initial roasting period.

When I think I've roasted my chicory roots for the proper amount of time, I grind and brew a small test batch before turning off the oven. This ensures I've roasted them to the darkness I enjoy.

Once they are roasted, chicory roots can be stored whole, or ground. I prefer to grind them on an as-needed basis, using either my mortar and pestle (which usually requires that I also run them through a sieve to get out the larger bits) or a regular coffee grinder. Roasted chicory coffee can be brewed in the same method you use for brewing bean coffee, but keep in mind that it is much stronger. You will have to do some experiments to determine how strong you like it, but I find that I use about 1/2 tsp. of ground roasted chicory root per cup of brew. I like to serve my roasted chicory root "coffee" with a big splash of milk to round out some of the bitterness and enhance the chocolate flavors.

1. In a small cup, mix the sugar and cocoa powder. This helps to incorporate the cocoa powder into the liquid in the next step.

2. Stir the sugar and cocoa powder into the still-warm roasted chicory root coffee until the sugar has fully dissolved.

3. Let the sweetened brew cool to room temperature, then refrigerate it for at least 2 hours.

4. Pour the sweetened roasted chicory root coffee into a 9x13" pyrex, or other similar freezer-proof flat container. Place it in the freezer, and set an alarm for 30 minutes.

5. Take the container out of the freezer, and use a fork to rake through all of the freezing liquid, breaking up any crystals that have formed. Continue to do this every 20 minutes until it looks like it has uniformly frozen into small fluffy crystals, like snow.

6. Serve the roasted chicory root granita in a cup or mug with a dollop of whipped cream. I don't think the cream is optional, but I suppose that's up to you.