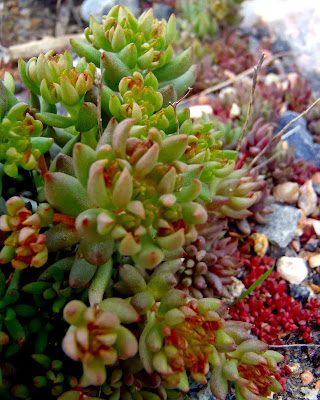 Alright, you've got me.  I fully admit to a high degree on messing around and having fun in the kitchen.  But you know what, I feel like life is too short to take any of this seriously.  Playing is important.  Play hard, suck the marrow out life (and the bones, if you have the opportunity!).

Because I employ a large degree of creativity and art in the kitchen, some of my recipes turn out ok, they are rarely bad, and never inedible (yet!).  But sometimes, every so often, I feel like I've stuck a high note.

Such is the case with these wild garlic and dill stonecrop pickles.  Stonecrop (sedum lanceolatum) is a small succulent plant, no bigger than a finger, possessing fat juicy leaves, which grows abundantly in the mountains here.  I thought I'd experiment with making it into pickles, just see what would happen.

Let me tell you, I was blown away by the result.  These pickles are at once crunchy, and perfectly sour and spicy - as good as any deli pickle you could ever hope for.  This is a major victory for me, because I now know that I can have a stock of local/foraged dill pickles to get me through the winter!  And the best part is that these pickles take mere minutes to make! 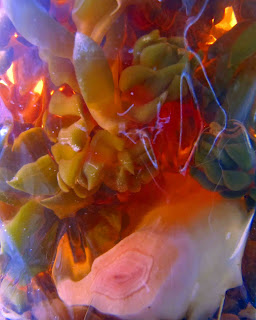 When picking your stonecrop, try to find smaller, more compact shoots.  Personally, I don't like them as much once they've gone to flower (although some prefer the flavor that way, judge for yourself).

Nip off any roots from the stonecrop, then wash.  Pack them into sterilized half pint jars, along with a clove of (wild if possible) garlic, and some dill seeds (I used some from my garden, two years ago).

Heat up the pickling liquid - one cup cider vinegar, one cup water, 1 tsp. salt, a spoonful of mustard seed (adjust ratio as needed), until at a bare simmer.

I'm sharing this recipe with Fight Back Friday.

And you can also find this recipe on Punk Domestics!