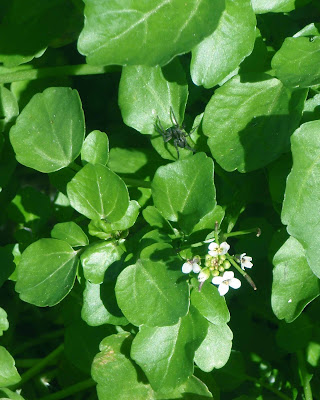 Watercress (Rorippa nasturtium-aquaticum) is my treasure. I've got a secret location, fed by spring water, in which watercress grows year round.  The spring is cooler than the surrounding waters in summer, but relatively warm in the winter. So even now, during the longest, coldest, snowiest days of winter, there are still tiny fresh green leaves growing just below the surface of the water.  In the summer, it grows bushier and bigger, and I can take as many handfuls as I like. But it's now, deep in the dead of winter that I most appreciate my emerald gems. 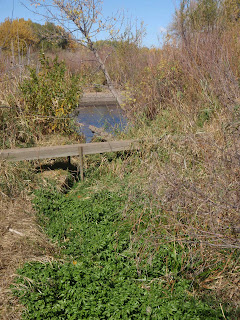 Actually, my secret watercress spot is within blocks of my mom's place (but I doubt that even the three of you who know where that is would be able to find it).  I had the pleasure of taking my mom down to see the thick carpet of watercress one day last fall, and she was very excited to taste the peppery greens and to point out which leaves she wanted me to harvest for her.  But I don't think it sunk in how lucky she was until we were at the store one day, and she saw tiny bunches of sickly looking watercress selling for $2 each.  Thereafter, she was quite enthusiastic about her watercress patch.

You can find watercress growing in cool running water, and can be recognized by its sturdy oval leaves and tiny white flowers. It is crucial that you pick watercress from clean water.  Be very aware of what is upstream or possible chemical contamination. Parasites are a real danger, too. To help minimize the danger of consuming watercress that will make you sick because of the water where it has grown, only snip off the leaves that grow above the water.

If you are lucky enough to get your hands on clean wild watercress, you can use it in almost an unlimited number of ways.  It adds amazing bite to salads, a crispy crunch on sandwiches, and cooks up like a dream in soups. One of my favorite ways to eat watercress is in the style of creamed spinach.

Started by roughly chopping a large bunch of watercress.  No need to be fussy, just get it cut into bite-sized pieces.

In a cast iron skillet over medium heat, saute a diced shallot (or 1/2 a small onion) in lard until soft.  Add in chopped watercress and cook, stirring, until it has gotten wilty, dark green, and tender.   Reduce the heat to low, stir in enough cream to make a sauce, season with salt, pepper, and a few scratches of nutmeg, and let it bubble a bit until luxuriously thick.

Creamed watercress pairs nicely with game, such as deer peppersteak.