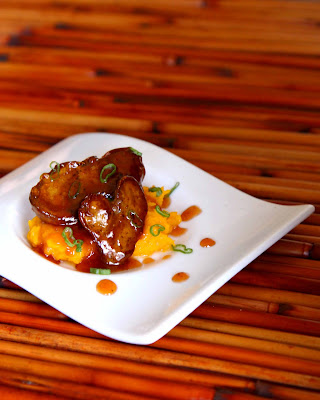 I don't know whether or not it's a good idea to start out by telling you that highbush cranberries (Viburnum opulus) have a strong scent when they are cooking.  I don't want to scare you off from eating them, but highbush cranberries are known by another name in my house - stinky sock berries.  But hey, lots of great tasting foods have strong odors, just think of the world of cheese.

I couldn't resist highbush cranberries. I was riding along one of my usual trails in a snow storm in early December when they first caught my eye.  Amidst all of the gray and brown of winter, their cherry red color was attention-grabbing.  I kept riding past them for a week, not sure I wanted to slide down the embankment, and wade across the mud/ice to get to them. But eventually curiosity got the better of me, and I put on my rubber boots and braved the ditch to check them out.

When I saw that the shrub had leaves with three lobes, and the berries had a single flat seed in the middle, I knew that they really were highbush cranberries (which are actually a honeysuckle). I excitedly started my harvest. In the midst of picking, I heard a muffled "somethingsomethingsomething BIKE something." I thought someone was trying to run me out of the ditch, and even though I was picking legally, I generally try not to cause any trouble, so I simply yelled "yes," while frantically trying to finish picking my highbush cranberries.  Then I heard "HELLO?" and when I popped out of the ditch (which was far taller than my head) I saw a friend from the bike shop, who simply wanted to know if I had had an accident.  Sigh, foraging is always an adventure.

While highbush cranberries were new to me, my friend Alex of A Moderate Life was well familiar with them, and told me that she just cooks them down and uses them like regular cranberries.  So, I decided to go the jam route for easy storage.  I loaded the pan with highbush cranberries, added 1/2 c. water to keep them from scorching and let them cook until they all had popped and released their juice (warning - this is the stinky bit).  I then ran them through the food mill (cheese cloth would also work) to get their juice and pulp, returned this to the pan, added an equal amount of water, and sugar to taste, and let the mixture simmer until it was a jam-like consistency. Highbush cranberries must have a lot of pectin because my jam came out quite thick.

I found highbush cranberries to taste much earthier than true cranberries; they have a similar tartness, but not the same high note. I thought that the strong flavor of the bush-cranberry jam would pair very well with another strong flavor - liver.  And it turns out that they were amazing together, each mellowing the other in a fantastic swirl of flavors.  Try this one, I don't think you'll be disappointed.

Clean, dry, and season chicken livers with salt and pepper.  Saute them in lard in a medium-hot cast iron skillet, about a minute on each side. Be careful not to over-crowd the pan.  Remove the chicken livers from the pan, tent with foil, and let them rest for at least ten minutes.  The trick here is to get a nice brown crust on the livers, and leave them rosy pink in the middle. 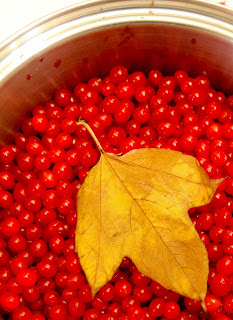 De-glaze the pan with a few spoonfuls of highbush cranberry jam, thinning with a little water, if necessary, to form a nice sauce consistency.  Add in a pinch of salt, some freshly cracked black pepper, and a 2-3 crushed juniper berries, to taste.  When the sauce has become nice and bubbly, add in a few small pats of cold butter, one at a time, stirring constantly.  If you're a ten year old at heart like me, have yourself a good giggle over the fact that this technique is called mounting.  Once incorporated, the cold butter will leave the sauce magically glossy.

If you actually read all of that (thank you), do me a favor and look at the picture of the finished dish at the top of the page.  See how that one chicken liver looks like a heart?  Neat-o, huh?  That little heart-shaped liver made me so happy (it's the little things in life).