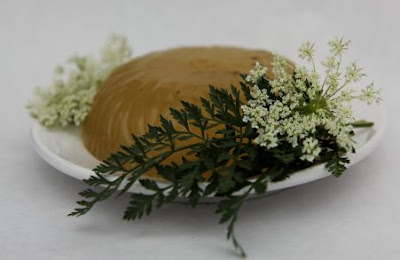 The very first plant that I teach people in foraging classes is poison hemlock.  It is a very common plant in our area, filling the ditches and sprawling next to playgrounds.  Poison hemlock is no joke, and can cause serious illness and even death (think about Socrates).  That's why I make certain my students can properly identify it before they learn any edible plants.

Another reason to know how to properly identify poison hemlock is that its white flower heads and carrot-y leaves look like many other flowers in the parsley family, some of which are edible and/or medicinal.  Queen anne's lace, or wild carrot, is a fabulous wild food that is among the edibles in the parsley family.  But it is not a plant I'd recommend for novice foragers simply because the risk of confusing it with poison hemlock is too high.


Throughout much of the winter here, low-lying mats of poison hemlock (Conium maculatum) leaves remain invitingly green and look much like parsley.  Some say that poison hemlock smells badly, or even of death.  My nose disagrees.  But it doesn't have the characteristic smell associated with parsley or carrot leaves.

Once it sends up its flowering stalk, poison hemlock grows to be quite tall in most instances, sometimes exceeding 8'.  The white flowers bloom in a shape that resembles an umbrella, or umbel.  I think that the flowers of poison hemlock look like exploding fireworks.  Even after the umbrels of poison hemlock have dried, they remain in this shape, like fingers reaching outward.

One of the best ways to spot poison hemlock is by closely examining its stalks and stems.  The hollow stalks of poison hemlock are hairless, splotched with purple, and are often coated with a white bloom that can be wiped away with your finger.

It is a good lesson to learn to identify poison hemlock.  But in the process of learning, don't get into the habit of touching it.  And never so much as touch it to your lips.


As I mentioned previously.  Queen anne's lace (Daucus carota) is not a good plant for beginning foragers to try simply because of the risk of mistaking it with poison hemlock.  Never eat a plant which you cannot properly identify.  No harm ever comes from walking away; just consider it a learning experience.

To the trained eye, queen anne's lace, also known as wild carrot, has many distinguising characteristics.  Perhaps it will help you to personify her, and remember that the Queen has hairy legs and pricked her finger while mending lace and left behind a drop of blood.  This member of the parsley family has notably hairy stems that are solid, not hollow.  Also, the flower umbel of queen anne's lace is flatter and denser than that of poison hemlock, and can often be found with a spot of purple or burgundy in the center.

At its greatest height, queen anne's lace is usually much shorter than poison hemlock, generally not exceeding 3-4'.

Queen anne's lace both emerges and blooms later than poison hemlock.  It smells very much like parsley.

Perhaps the best identifier of queen anne's lace is that its spent flower heads curl into the shape of a cup or bird's nest.


Queen Anne's Lace in the Kitchen


Once you know how to safely identify queen anne's lace, it's a pretty versatile plant in recipes.  In the spring and fall, the roots may be dug up and eaten in the same manner as domestic carrots.  While these are quite flavorful, don't expect them to be as big or tender as their orange commercial cousins.

If you enjoy the flavor of the leaves, they can be used either fresh or dried as you would parsley.

I really look forward to the flowers.  Young flower buds may be added to stir-fries and skillet dishes.  Or the tiny flowers can be scattered upon finished dishes or in salads.  Mature flowers make a delightful jelly that tastes like dew on a summer meadow.

It was only this year, after reading Tama Wong's excellent book Foraged Flavor, that I learned you can also eat queen anne's lace fruit (the tiny green or red bits that eventually dry into seeds).  Harvest the fruit of queen anne's lace after the flowers start to curl into birds nests, but before they go completely brown.  Queen anne's lace fruit has a strong flavor that is like an explosion of parsley with a long finish of citrus.

1.  Place the queen anne's lace flowers into a pint jar.  Pour the boiling water over the flowers, cover, and let stand at least until the water cools to room temperature, or up to 12 hours.  Strain out the spent flowers.

2.  Sprinkle the powdered gelatin into the queen anne's lace infused water, stir, and let it sit for at least 30 minutes.

3.  In a small saucepan, gently heat up the queen anne's lace infused water and gelatin over low heat until the gelatin has melted.  Stir in the honey.  Let the mixture cool to room temperature.

4.  Gently stir in the queen anne's lace fruit and soda water, then pour the mixture into a bowl or decorative mold.  Refrigerate until set, at least four hours.