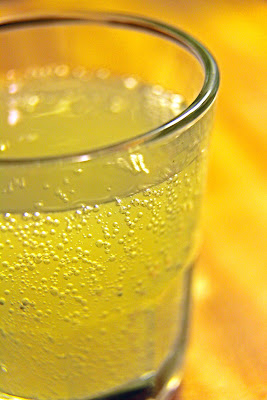 Because the tender young growth of spruce (Picea spp.) - the same vibrant green tips which are the featured forage of the month for the Wild Things Round Up - are an excellent source of vitamin C, spruce beer was historically consumed for it's nutritive/medicinal value.  Both sailors and colonists knew spruce beer for it's value in preventing scurvy, and also drank it because it was often reliably cleaner than available drinking water.

Me, I just wanted to know what spruce beer would taste like because I'm utterly enchanted by the flavor of spruce.  I endeavored to make the soda version of spruce beer, sparkling and alchohol-free, much like root beer.  But spruce beer can also be brewed as an alcoholic drink.

I've made all sorts of fermented beverages before - from my own root beer, to lemon balm soda, to apple cider.  They've all tasted pretty nice, but getting the correct level of carbonation is touchy.  The resulting drinks either turn out a bit disappointingly flat, or so effervescent that 3/4 of the beverage erupts upon opening.  Messy, that.

Hang on, did she say plastic?

Yep, if you know me at all, you know that I tend to flip out a bit about plastic touching my food because nobody can tell me for certain just how much of that plastic chemical gunk is seeping into my food.  So for me, it's almost all glass and stainless steel and cast iron in the kitchen.

How-ev-ah.  When I heard about brewing homemade sodas in a re-used plastic bottle, and felt pretty certain that this was an elegant solution to the carbonation problem.  You see, you brew your drink in a 2 liter bottle, and when it has reached the correct level of carbonation, it becomes hard like a familiar bottle of grocery store soda.  Kinda genius.  So, I used the method described by Dr. Fankhauser on this site.  Follow the link if you're interested in making homemade root beer or ginger ale using the plastic bottle method.

First, thoroughly wash and dry a used plastic two liter bottle.  I used soapy water, then let the bottle sit with a dilute vinegar water in it for a few hours, then let it dry in the sun.  Also, sterilize all utensils that you use for this process using boiling water.  Try to keep the whole operation nice and clean, like you would with canning, so that you don't end up propagating the wrong critters.

Use a knife to chop up 4 oz. of spruce tips (I've tried using a food processor for this, with very little success).  Place the chopped spruce tips, along with 1/2 c. (loosely packed) hops and 2 c. non-chlorinated water into a pan.  Bring to a boil, let simmer for two minutes, then turn off heat and let the herbs infuse into the water for a few hours (up to 24).

Return the mixture to heat, and let reduce by half.  Strain the mixture through a fine-mesh sieve lined with a few layers of cheese cloth (or a coffee filter), pressing the solids to extract all of the liquid infusion.

Using a sterilized funnel, add 3/4 c. sugar to the 2 L bottle.  I've read that you can go as low as 1/2 c. sugar, if you want a really dry drink.  I found 3/4 c. sugar resulted in a drink that tasted lightly sweet without being syrupy.  Also, you can use molasses to make spruce beer, but I didn't want the molasses flavor to mask the spruce.

Next add a scant 1/8 tsp. of regular powdered baking yeast.  Swirl to combine.  Now add you spruce/hop infusion (I ended up with about 2/3 c. after spilling some of it when I got impatient with how slowly it was filtering *blush*), and again swirl the mixture.

Finally, fill the bottle to the bottom of the neck with water, and cap tightly.  Shake the bottle until the sugar is thoroughly dissolved.

Once the spruce beer has become thoroughly chilled, it's ready to enjoy.  Apparently, the taste of spruce beer can vary widely, depending on the variety and age of the spruce used.  My own spruce beer has swirling flavors of grapefruit and orange, with the fruity bitterness of hops in the background.  And the level of fizz was just perfect. In other words, it was delicious!

The Wild Things Round Up is a foraging challenge, and you are invited to play along.  We've already cooked up Spruce Gremolata, Spruce Goat Cheese Balls, Spruce Salt, and Spruce Cornmeal Cake.  Show us the ways in which spruce has sparked creativity in your kitchen.  Email us your entry at the end of the month   wildthings.roundup@gmail.com
Labels: foraging spruce beer spruce tips wild things round up