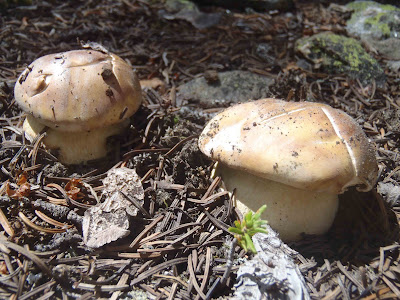 Now that I know how to correctly identify them, I'm wondering just how many Boletus barrowsii I've overlooked.  With their pale duff colored cap, the B. barrowsii, especially buttons and less mature ones, don't look much like king boletes.  But upon closer inspection, they clearly have the bulbous and netted stalk characteristic of porcini.  This discovery makes me glad that I'm in the habit of feeling up mushrooms.  Upon meeting a new mushroom, I first reach my index finger under the cap and determine whether it has gills or pores or teeth.  Then I get down on the ground, and peer at the stalk.  If I hadn't done so for the rather unassuming mushrooms pictured above, I might never have learned to identify B. barrowsii, which is to date, the best mushroom I've ever tasted.

Here in the north-central Rockies, Boletus rubriceps (aka porcini), the mushroom pretty much every local mycophile is hunting this time of year, displays an unmistakable nearly wine-colored cap.  Once you know how to spot that color, it is very easy to pick out B. rubriceps.  B. barrowsii, on the other hand, gives every appearance of being a pale version of porcini, and even grow in the same locations; this is why it used to be referred to as white king, and still commonly goes by that name.  However, it has since been recognized as a distinct species and named for Chuck Barrows. 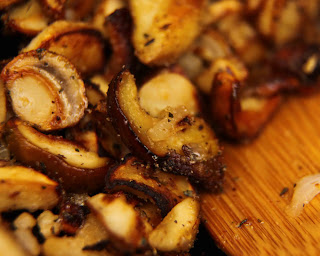 After a good day of mushrooming last week, I was able to do a side by side tasting of six different mushrooms upon returning home.  I sampled B. rubriceps, B. barrowsii, gem-studded puffballs, hawk's wings, hedgehogs, and Albatrellus confluens.  The puffballs had a good nose when fresh, but where somewhat lackluster in the saute pan.  The clear flavor winner, however, was B. barrowsii, which were slightly more flavorful than B. rubriceps.  B. barrowsii tasted like lightly toasty caramel popcorn, whereas the B. rubriceps tasted more buttery and meaty (they always taste vaguely like unsmoked ham to me, although I've not heard of anyone else with this opinion).

The flavor of the B. barrowsii is so special that after my last mushrooming trip, I set aside all of them to eat separately.  In order to highlight their flavor, I chose to serve them simply, in a cream sauce over pasta.

Use a soft brush and a vegetable peeler to clean up your mushrooms, then slice them into 1/4" pieces.  Heat a cast iron skillet over medium flame for five minutes, then place the mushrooms into the dry pan.  I know this technique seems odd, but it's fairly common for the more watery wild mushrooms, and helps to drive off moisture and save you from having to use too much butter (did I just utter that phrase?  too much butter?  haha, I say that only in terms of economy and the fact that cream will be added later).

Leave the mushrooms in the pan, stirring occasionally, until the water has bubbled off and they start to brown.  Then add in a fat knob of butter, some finely diced onion, salt, and some crumbled dried wild oregano (or herb of your choice).  Saute until the mushrooms take on a deep golden brown, and the onions become soft.

Reduce the heat to medium low, add cream, and let it gently simmer down for a few minutes to make a nice thick sauce.  Adjust salt, if necessary, only after the sauce has reduced.  Serve over pasta, garnished with a finely diced garden tomato and some parsley.

*any edible mushroom may be used in this recipe